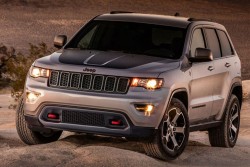 Someone at Jeep HQ mistakenly released photos of the soon-to-be-confirmed Jeep Grand Cherokee Trailhawk (shown here) but although the images were quickly withdrawn they’d already found there way onto the internet.

What we see looks like a standard-isa Grand Cherokee with a few design and trim tweets to fit in with the Trailhawk theme used on the Renegade. There are a few red exterior highlights, tow hooks, larger wheels with more aggressive tyres and what looks like a slightly raised suspension set up. we will have to wait for the official confirmation from Jeep as to what the entire Trai [...]

Observe the world through a Jeep Cherokee grille

The spot shows an sequence of wild landscapes and metropolitan scenes seen from a unique viewpoint: through the seven-slot grille: Africa, South America, North America, Antarctica, Asia, Europe and Oceania – coming together to express the most authentic spirit of adventure in the Jeep’s DNA.

The 200 hp of the new 2.2 MultiJet II engine, champs at the bit behind the famous grille of the Jeep Cherokee. The commercial is an epic tale told through pictures, music and the words of the claim ‘Roads are just a point of view’. The chosen route is not an issue – the advert shows mud, sand, water and tarmac – when you can rely on [...]

Jeep has announced another record sales period.  For the 18th consecutive month, the brand continues to grow in Europe with June being the best month ever with 8,500 sales and a 176% increase compared with June 2014.

At product level, with more than 5,400 units sold, the Jeep Renegade has been a particular success and is now permanently among the most sold vehicles in its segment in some of the major European countries and top 5 position in places.

The Grand Cherokee performance was as well positive. In June, compared with the same month in 2014, the vehicle had an 18% increase in sales in the European region, reaching the top positions in its segment in key countries like Italy, Switzerland and Poland.

An important contribution came as well from the iconic [...]