Watch the entire sale in our video

Last night I had a dream except it wasn’t a dream, this really was a Land Rover Defender selling for £400,000!

Upon arriving at Bonhams Auction house in New Bond street London, I was greeted by a champagne reception and what can only be described as the cognoscenti of the Land Rover World. HUE166 was there in all of his green glory surrounded by the people you only normally see in magazines and press releases including Roger Crathorne, Stephen and Nick Wilkes to name but a few. However I digress, the star of the show was none other than the 2 millionth Defender to roll off the production line of the hallowed halls at Lode Lane.

The aura surrounding the venerable little 90 was amazing with celebrity build crew, one off parts and a couple of rather natty plates detailing the build number and all those who had a hand in putting it together. Eventually we sat down and began the proceedings with a great intro by John Edwards, MD of Land Rover Special Operations, touching on the history and heritage of such an icon, the tone was well and truly set. This was followed by a brief film detailing the build and all those involved, always amazing to see how Defenders have touched so many people across so many walks of life.

We were then treated to a heart warming address from Virginia McKenna and Patron, Joanna Lumley of the Born Free Foundation, it was really nice to see how Land Rover have been so prevalent supporting the foundation since Joy and George Adamson decided to raise a Lion cub named Elsa. We were now treated to the dulcet tones of the Master Auctioneer who commanded the rowdy room with charisma and poise. Bidding was opened at the £20k mark and quickly proceeded to pass the £100k line with many enthusiastic bids coming from all over the room. As we hit the £150k mark things calmed down slightly and the bidding battle became a two horse race, both telephone bids from Lands far far away. After a tense 15 minutes of to-ing and fro-ing we were settled at the £360k mark.

From here it was only a matter of time before we settled on a final bid of £400,000 from an as yet unnamed individual who is now the proud owner of what is probably the most expensive Defender ever sold. The stage was now set for Mike Adamson, Chief Executive of Red Cross to address the room and give his heartfelt thanks to all involved and wind up proceedings in a fitting manner.  It was an incredible spectacle and I was proud to be a part of it by merely being there, the atmosphere was electric and the rhetoric was beautiful, totally befitting such an iconic occasion in the rich history the Wilkes brothers vision from that beach in Red Wharf Bay all those years ago back in 1947.

Thank you Land Rover and thank you to all involved for a really special evening and a point in my history I will never forget. 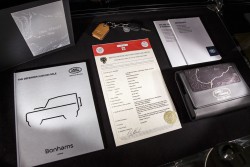 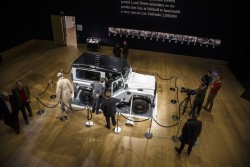 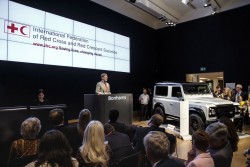 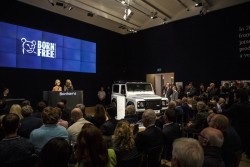 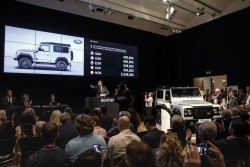