Our depth of engineering ability gives confidence that the right call will be made on the back of 28 years of experience to make your Defender, Jeep or other vehicle perform at its best.

We will never be afraid to advise whether it be the simple or more complex route. Our first objective is to give the correct advice to everyone so the most appropriate upgrade is recommended for your truck and budget. We have a number of partners we continue to work closely with over many years to deliver the right solution.

Your best option will always be to come and have a chat with us so that we can discuss your requirements and budget and demonstrate what we can achieve.

Our 28 years of experience has always allowed us to offer our clients the possibility of upgrading their Land Rovers, Jeeps and other 4x4s to give them more power, refinement and fuel economy. Modern turbo diesel intercooled and common-rail engines can offer similar and sometimes better performance than the big old V8 petrols.

Particularly where you might need lots of low down torque and plenty of horsepower for heavy commercial towing. And for those who still need that great sound of the big petrol V8 motor we are happy to assist with several options: Rover, Ford or Hemi turn-key units delivering anywhere between 400bhp and 600bhp with supercharger.

Since the very early years Nene Overland has been upgrading and tuning the original Defenders fitted with 200TDi and 300TDi engines, either by fettling and tweeking the factory 2.5litre diesels or by fitting various Isuzu and GMC engines including the hefty 6.2 and 6.5 V8 bi-turbo lumps.

Later on the International 2.8 TDi powertorque proved popular giving great reliability and simplicity with a huge gain in low down torque suiting heavier Defenders built for extreme off road or expedition use. Nene Overland was also the first company to fit the BMW 6 cylinder TDi into a Classic Range Rover and the first company to fit a Land Rover TD5 into pre-TD5 era models.

Coming right up to date we have developed the three engine options you see here: Two Petrol V8s and a very torquey five-cylinder diesel. 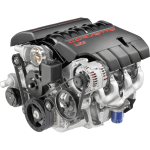 Land Rover owners can transform their vehicle into a truly wild V8 Defender by bringing in their existing vehicle for conversion or letting us find the perfect Defender and installing the LS V8 for them. Our years of experience in tuning has yielded the highest-ever performance levels from a Defender. Our technical abilities along with attention to each and every detail, has seen us develop cutting-edge components that are technically innovative and ultimately faster and stronger than the competition. The Nene Overland Wild Defender programme replaces the stock diesel engine and gearbox, with a GM derived 6.2L petrol V8 and 6 speed automatic gearbox providing 430bhp and more than 540 NM of Torque at 4,700 RPM. Additional power upgrades are available for power increases, providing over 550bhp.

If a V8 engine is just a little bit to flighty for your needs or you just prefer the grunt and torque that only a diesel can give we can still provide you with V8-matching performance using the 3.2 TDCi. It comes with 270bhp (120bhp more than the standard 2.2 or 2.4 TDCi lumps) and is perfectly matched with either the six-speed manual or five-speed automatic. With the addition of a variable vane turbo you could even break the 300bhp barrier. The 3.2 TDCi is from the same Ford stable as the standard Puma Defender engines but in five-cylinder form rather than four. This means it all fits perfectly and talks to the rest of the Defender electrickery without any problem – after our tuning wizards have run their clever fingers over it, of course. Many of the ancillaries also remain as they are common to the 2.2/2.4. 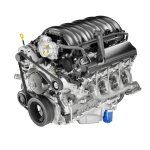 The L82 engine that launched in 2018 for use in the Chevrolet Silverado 1500 and GMC Sierra 1500. It is commonly referred to as an EcoTec3 5.3L engine and replaces the L83. Compared to its predecessor the L83, the L82 has a different valley cover, centered water pump location, and exhaust system. By centering the water pump, it allows Gen. 4 high-mount air-conditioning and power steering pumps to be added. It continues to incorporate Variable Valve Timing (VVT). The engine also uses direct fuel injection technology, which shoots fuel directly into the combustion chamber instead of the intake runner. The L82 continues to use Active Fuel Management (AFM. DFM has cylinder deactivation lifters on all eight cylinders rather than just four. DFM has 17 modes of operation and can run on as little as two cylinders at a time. This engine will take your vehicle to that next level with 383 ft-lbs of torque at 4,100 RPM and a whopping 355bhp.

The addition of an automatic gearbox is one of the most requested modifications we deal with for Defenders particularly when our clients spend lots of time city driving. The latest units with flexible ECU controls allow us to offer variable mapping of gear change patterns to suite the precise set up of your vehicle and your driving style and environment.

ZF HP 22 and 24 automatic gearboxes are the preferred options to give you reliable a automatic transmission for your Defender. Larger diameter torque converters may be recommended for heavy use or high-torque Defenders. 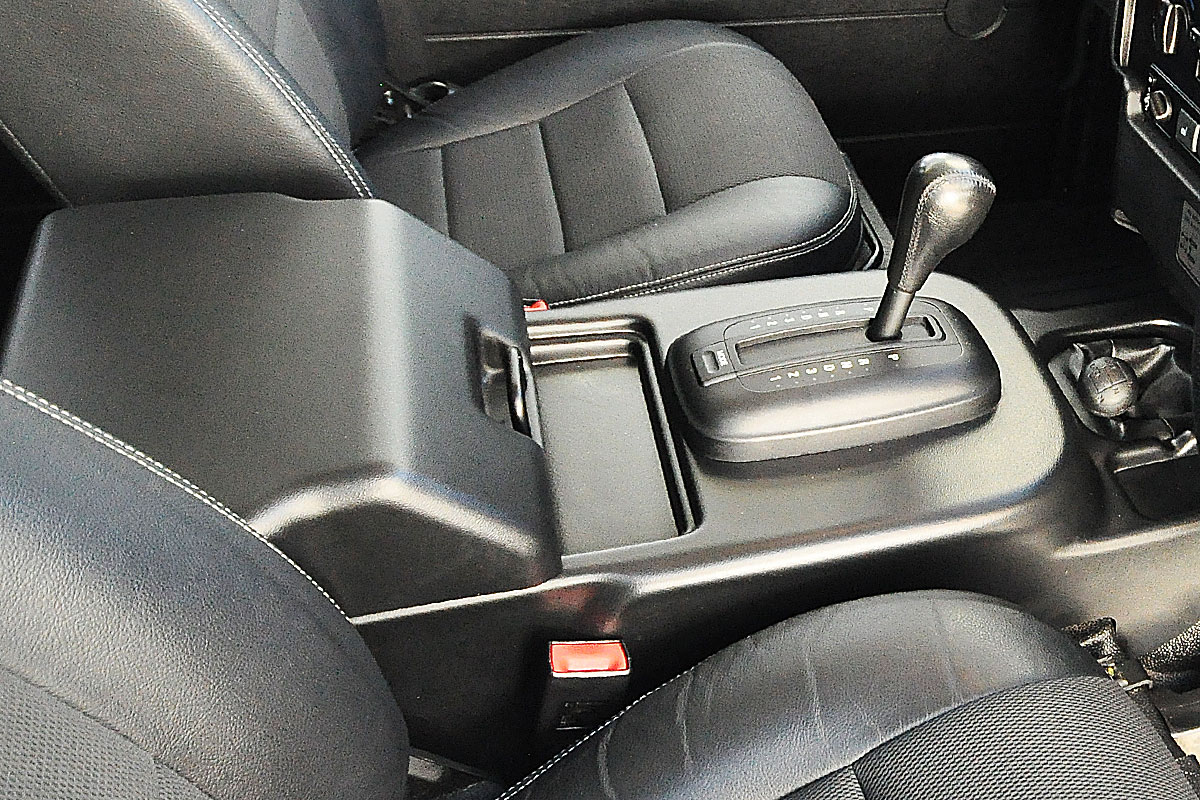 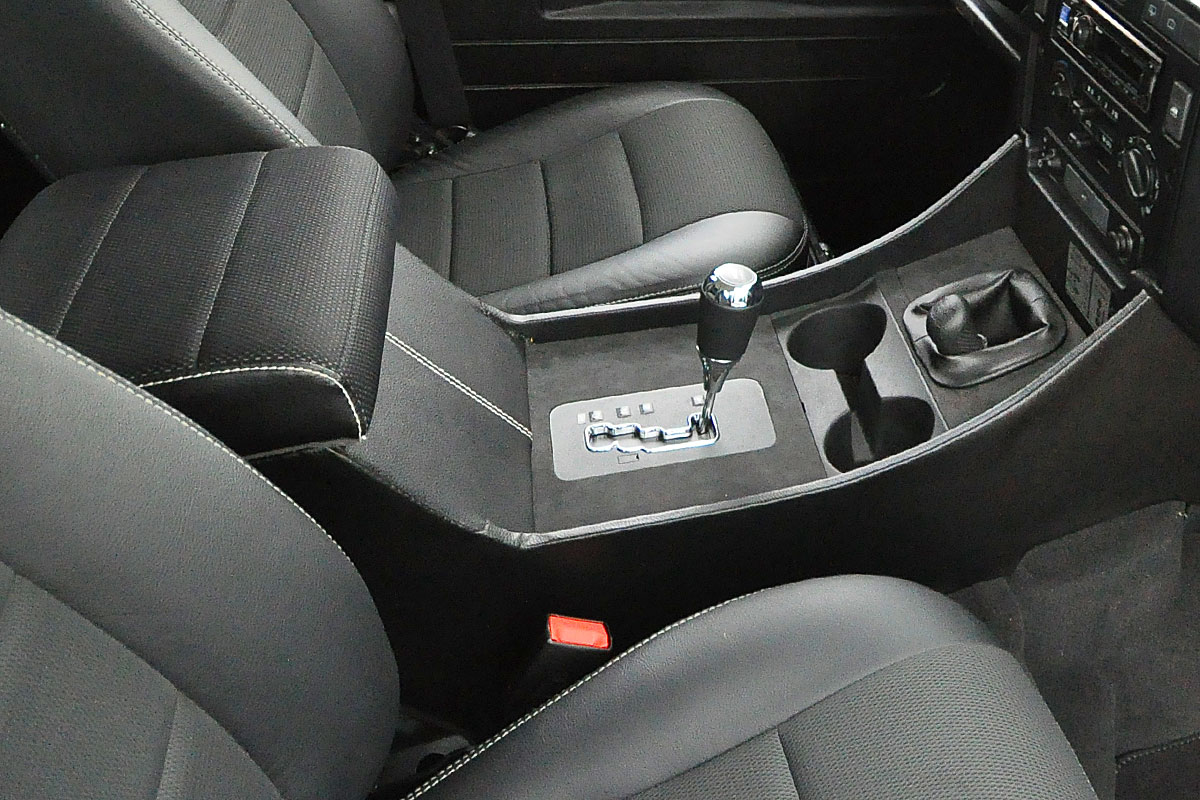 We are usually able to uplift your final drive gearing by at east 15% by fitting a set of upgraded gears to the existing transfer box. This aids fuel economy and quietness by dropping engine revs by the same 15% but maintaining the same motorway cruising speeds. It also works well when a smaller diameter tyre is fitted which would otherwise gear-down you Defender. It works particularly well with TD5 as they do tend to be a bit low geared. For even further uplift in final drive gearing we can offer a mechanical overdrive unit for TDi, TD5 and Puma models.

We always do our best to help everyone enjoy the Iconic Defender. Not only can we make it easier to drive with an automatic conversion but also work closely with Chris Elliott Adaptions to offer all kinds of extra driver aids for those with physical restrictions.

Improving braking can be paramount on a standard Defender if it is being used for heavy towing or equipped to carry lots of specialist equipment. Working hard every day in all weathers and ground conditions creates a need for better brakes . And for those who are just out for the fun factor in their new Defender, having far more power and performance on tap makes better braking a must!

We can add the ultimate large brake rotor and 6-pot callipers to give you fantastic stopping power up front. We can fit either Tarrox, AP Racing or Brembo kit which are all suitable for ABS equipped Defenders and many other high performance street and track cars. High-performance, no-flex 6-pot callipers will give you the opportunity to add incredible stopping power for your fast road Defender Jeep or make sure your heavily laden commercial or expedition truck will always stop far short of any dramas.

We can also add a more mainstream EBC disc and pad combinations to the rear of your vehicle to give far better stopping power. Green-stuff grooved and dotted discs give a sharper and more responsive pedal feel for high speed and heavy commercial applications.

With most modern vehicles equipped with ABS and Traction Control adding higher quality brake fluid will allow your braking system to continue to give responsive feel in arduous conditions of extreme cold or hot as well as constant high speed work around the track or field. Brake fluid needs to maintain constant viscosity to guarantee reliable high performance at all times. 5.1 brake fluid will work reliably in temperature ranges 40°C higher than standard manufactures fluid.

Better performance will always require better braking and suspension. The correct combination of all the various components will give you the most fun behind the wheel with the least effort, more enjoyment, less stress and better safety. Your vehicle will also be less prone to mechanical failure if it is set up correctly for optimum performance. This philosophy also applies for anyone who works their vehicle hard in commercial environments, heavy towing and load carrying or overland expedition trucks carrying lots of kit and equipment.

We usually add heavier duty suspension systems at standard with lowered or raised ride-height to suit your needs. Our favoured set up for heavy duty use and overland expeditions is Old Man Emu springs and shock absorbers. OME products can be obtained the world over and are able to be fitted without any major modifications. For fast-road driving we recommend Fox V2 race performance rebuildable shocks which can be valved and configured to suit the characteristics of a Defender or Jeep. They give the car a more surefooted and precise drive, holding the vehicle much steadier while fast cornering with much smoother rebound to take away any uncomfortable pitching. These shocks work very well off road across rough, undulating terrain at speed and continue to work for longer with the remote reservoirs due the extra oil capacity keeping shock fluids far cooler. Combining Fox shocks with bespoke springs tailored to suit each individual vehicle according to weight carrying requirement, ride height and hard or softer ride we can make your Defender or Jeep perform so much better.

Anti-roll bars will complete your driving experience by holding your vehicle very steady, reducing body roll by more than 50% over standard set up. Generally we can use lighter duty springs with our HD anti-roll bars giving a smoother, softer ride while enhancing cornering with less roll and side to side lurching from the rear end. You will be able to make much sharper more precise changes in direction. We may suggest a combination of all three components: springs, shock absorbers and antiroll bar. Or start with anti-roll bar, then add shocks and springs afterwards. For the best return on your investment we need to get the ride, pitch and cornering set to optimum without compromising on ride quality. Our objective is to give you a more comfortable ride with improvements in cornering, less pitching and body roll. Fun in your Defender needs to be a smooth ride while maintaining far better performance which will put far less stress on driver, passenger and Defender.

After updating suspension further improvements can be made to make your steering feel much sharper and more precise. Upgrades are often worth investing in to compensate for wider, larger wheel and tyre combinations as well as changes in suspension set up. There are various ways to achieve a better steering feedback and sharpness: Higher viscosity power steering fluid will add a smoother feel with less delay. Slightly smaller steering wheels also make for a much better feel while negotiating tight twisty turns. 15″ steering wheels suit our Retro and Heritage Defenders while a range of four Momo steering wheels look and feel the business across the range. The last advantage of adding these great looking steering wheels is that it naturally takes your elbow away from the Defender inner door top which everybody loves!

Please be aware that any tuning upgrade or modification may invalidate your Manufacturers’ Warranty. We are happy to aid and advise on this. As a general rule, over the years we have never experienced a manufacturer rejecting any warranty claim . If in doubt it would be wise to consult with us prior to approaching your local dealer if warranty support is likely to be required.