Red Bull build a unique promo vehicle from a Defender 130 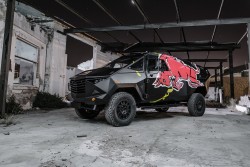 Red Bull are one of the world’s most active brands and are involved in all manner of sports, events and activities around the globe. To accompany them on their various travels they have quite a collection of planes, boats, cars and trucks. They are no stranger to the Land Rover Marque but their latest addition to the Red Bull Fleet is something else entirely.

It might not be immediately apparent what this is underneath but we can assure you that it is, in fact, a Defender 130.Built in Australia the bodywork consists of several interlocking triangular panels. The end result is very striking and the design of the panels gives is the appearance of a stealth bomber.

Originally it was meant to be liveried in their usual Red Bull Blue but we think you’ll agree the adoption of matt black was the correct decision.

This website uses cookies to improve your experience. We'll assume you're ok with this, but you can opt-out if you wish.Accept Read More
Thankyou
Necessary Always Enabled